Your Top Ten Policy Issues -- And the Winners Are ...

While PT's servers never approached meltdown, a number of our readers sent in their choices for our “Top 10” policy issues. We have our own ideas, but wanted to know yours. Throughout the comments – those posted on the site and received by e–mail – there was a similar undercurrent: that as a nation, we have been ill served by the lack of intelligent debate on issues that concern us most.

But, here you go—the sealed envelope, please. Let's start with the easy ones: (1) Education and (2) Healthcare. Writes Lisa Buhler, “I would like to see a discussion on the healthcare system – national healthcare has not worked for other countries – why would it work for ours? I would also like to see discussion on the “no child left behind” program – clearly it is not working like it was intended. It has forced our educators to teach to the "lowest common denominator" in the classroom – we are not challenging our young people!” 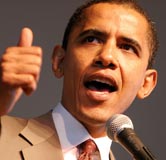 Missing in Iowa: a dose of Midwestern common sense?

In Meredith Wilson’s 1957 Broadway hit, The Music Man, Professor Harold Hill arrives in Iowa to sell the citizens of River City a boys’ band. Fifty years later, a handful of US Senators and other politicians descended on the state to sell them a Presidential election. Wilson’s story had a happy ending. Bags packed and skipping town, Hill falls in love with Marian Paroo, the town librarian, and sticks around to make good on his word. The politicos were out of Iowa faster than a marching band, stymied only by the country’s creaky air traffic control system which grounded them at Des Moines International for a few extra hours. (See, “Infrastructure Story,” following.) Moving on, they’ve since hit New Hampshire, Nevada, and soon several larger states.